As promised, Dixie arrived right on schedule. She’s back in Oh Valley, though only for summer vacation. When fall arrives, she  will fly back to live with her Aunt Myrtle in South Carolina Beach. Dixie’s constitution is quite delicate, unlike Darby and Delta who live in Oh Valley year-round. They have a cozy and warm home, The Insect Inn. Personally, I’m not a fan. It’s a tad cramped for my taste and no dogs allowed. I’ll introduce Accident, my real Cairn Terrier eventually. 🙂

In pictures, I’ve finally captured Dixie, whom I affectionately refer to as my little “Dixie Clip.” She’s a stunner, especially on my new Google Pixel 3A Camera.. er.. phone. It’s purported that my error in thought just now, was exactly what Google was going for, a phone that is an exceptional camera. I think of it as my new camera, that I can also make and receive calls on. (UPDATE  June 19th, 2019; I’ve had my phone 6 days and am glad to have it although, if you are trying to reach me, I’ve no idea how to answer it and I stumble over all the messages. No idea which way to swipe things either and seem to see the same msgs,over and over  again, though I try valiantly to clear everything up. Hmmm.)

Getting back to Dixie-Clip… She explained I’d have to take a single picture  when I could because she wasn’t coming outside again for a very long time. 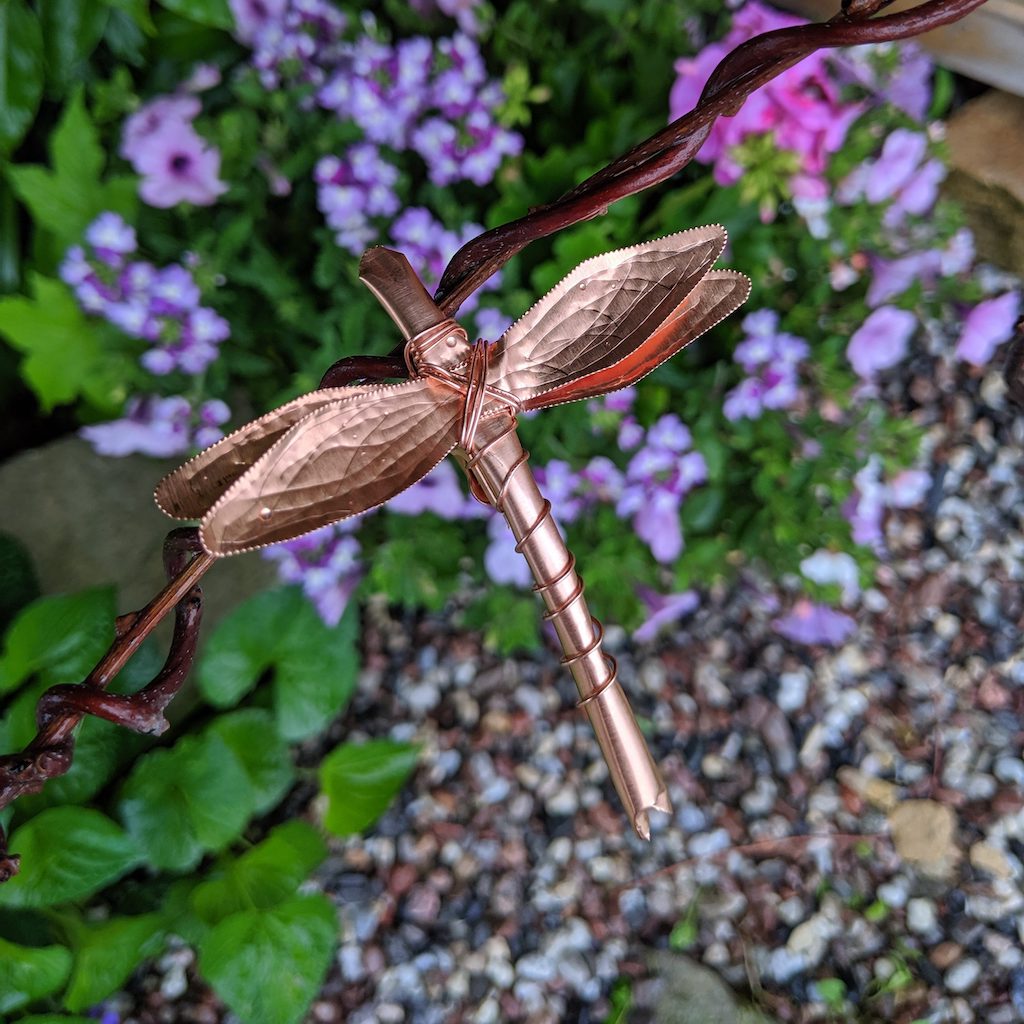 In Dixie’s words, “It’s too freaking cold and wet!”

If she’d known how cold it was here this spring with winter hanging on well into MAY, I’m certain she would have stayed in South Carolina Beach with her Aunt Myrtle’s for a while longer. On our Photo Op, I had to convince her to let go of my umbrella. She perched on its underside, not wanting to get wet. (I was sure she had told me she doesn’t mind a bit of rain. Had I dreamt it?)

Well at least I could keep an eye on her. We walked over to Judy’s Garden, a lovely spot with river pebbles and beautiful blooms. Once Dixie saw all the vast array of colours, she forgot about the rain. 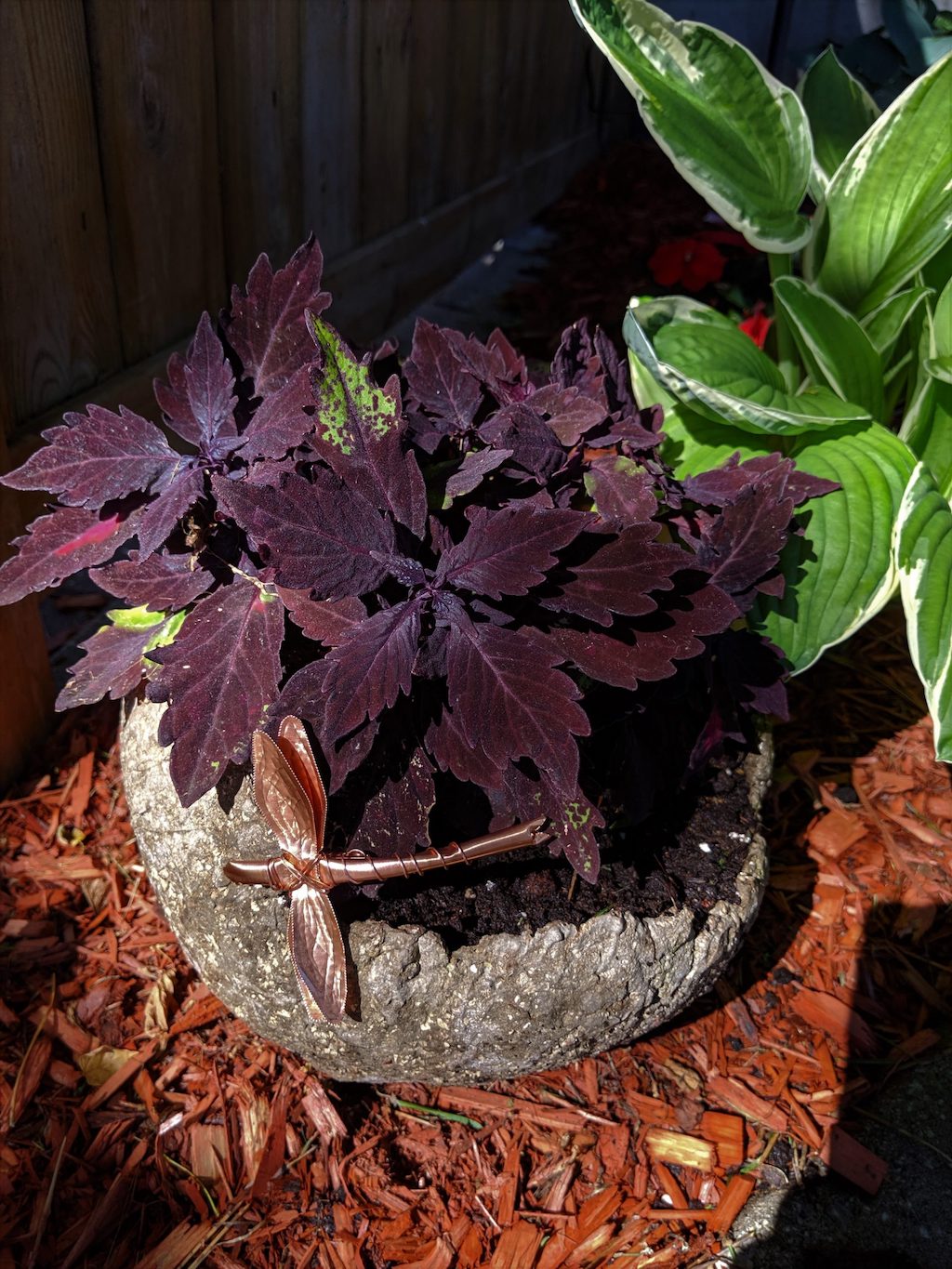 In her excitement, she flew off a vine suspended over a shrub where she was reasonably canopied, and I was concerned for her well-being as I raced to catch up. I found her behind the fence resting on the back side of the same shrub, by Judy’s potting bench. Dixie has always been partial to blue and found her watering can quite captivating. That, as well as a new plant pot awaiting its owner. Well, she just couldn’t help herself.

Realizing we were both a tad soaked, it was decided that we would head back to The Insect Inn and dry off.  When the sun reappears, I told Dixie I’d collect 50 more mosquitoes, 25 for each additional picture I posted. The 100 mosquitoes were for a single picture, not 3. She drives a hard bargain but I couldn’t help myself. She’s quite photogenic.

Stay dry everyone. The sun will be back to watch over us in Oh Valley. Til next time…. 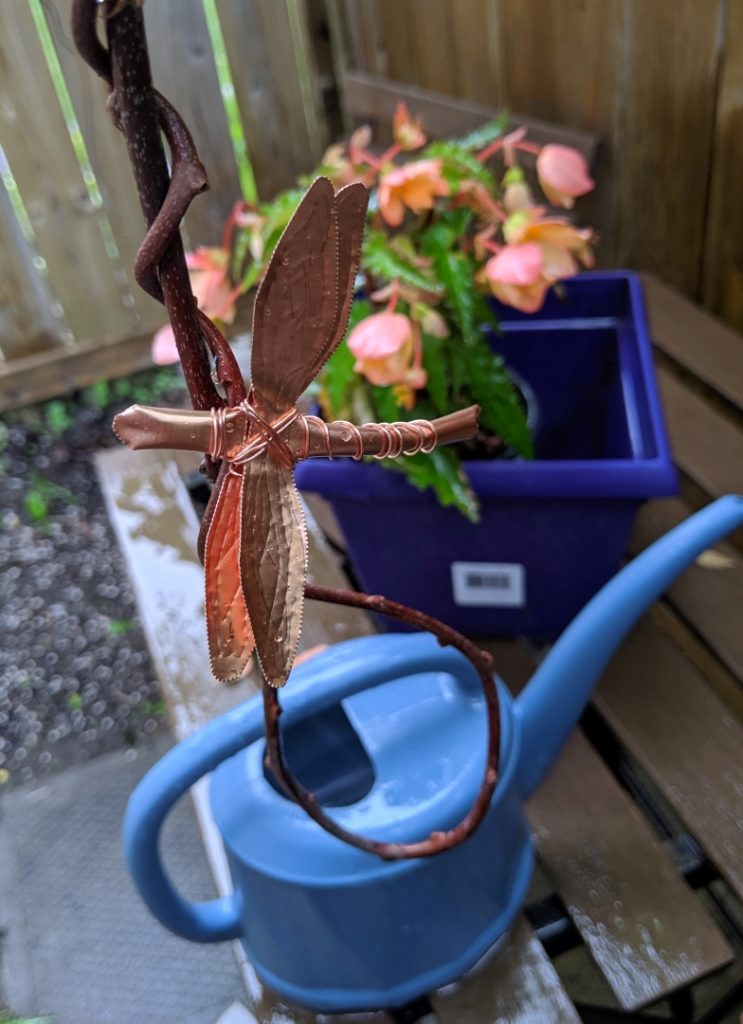 A final note to those who like being well informed. Delta is much more than she appears in her packaging. When you suspend her from her hook, you will find that she is perfectly balanced and sways so sweetly in the slightest breeze. I’m constantly hearing comments of, “Oh, She’s so cute.” I promise that you will not be disappointed.

Sue and The Fancifulls of Oh Valley