Buttercup is one busy butterfly. Though he is still young, there’s no time to play Rain Ball or Wing Tag. He cannot recall the last time he stopped to watch a sunset or dream about his future. He’s not bothered. He lives the role and life of his choosing, that of Community Answerologist, Oh Valley’s answer to Siri, Alexa, and Google Assistant.

Butter is depended upon by friends, family, neighbours, in fact everyone in Oh Valley, to solve life’s mysteries. He has developed a massive knowledge base, has an unceasing devotion to his community, and pursues further achievements. For this Buttercup has also been the recipient of a Rhodes Scholarship. Much of his success is due to his extraordinary photographic memory. Every picture Buttercup looks at, everything he sees is captured in a corner of his brain – a very large corner, so that he can recall every detail. 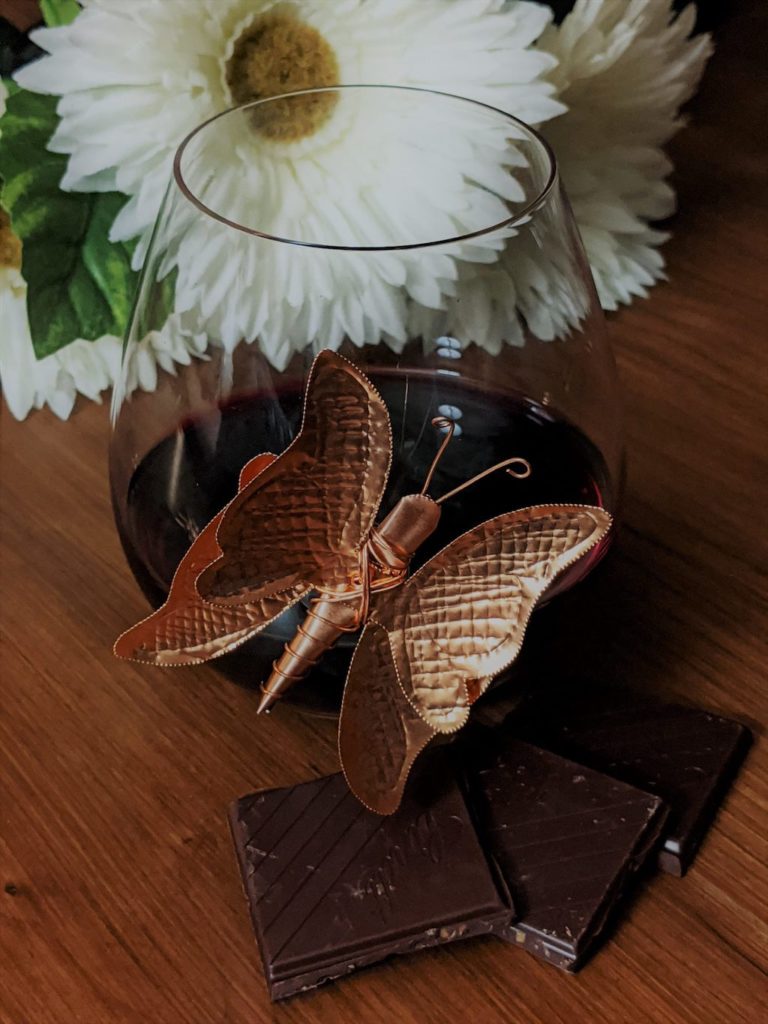 Buttercup – a perfect companion. A conversationalist and storyteller, any topic you wish.

Mystically able to bring his cocoon-filling book collection with him during his metamorphic process, Butter is easily able to fly up and find the exact book he needs to answer any particular question. His collection of books is massive and growing daily. Butter uses the Dewey Decimal System, to keep them neatly crammed on shelving that lines the curved walls of his turret room at the Insect Inn.

Wait a minute! How can a caterpillar bring his book collection with him as he emerges from his cocoon?  With each direct question I pose, I receive an answer from Buttercup that although lengthy and imaginative, does not solve the mystery. I’m left to chalk it up to the mystical forces of Mother Nature.

Equally as mystical is the turret room he resides in. From the outside, no Fancifull can say for certain how tall the turret is. Its peak is much higher than insects can fly. Buttercup could determine its height if he had the inclination. He knows all about triangulation. His only concern is that it is tall enough to hold his books. Buttercup, unlike other Fancifulls is also aware that the tower is growing taller as his collection continues to expand. That same mystic power that saw the collection arrive at the Insect Inn is continuing its charm.

Today, Groundhog Day, is Buttercup’s favourite day of the year. Through his studies, he has developed the power to keep himself and all around him in a “Continuum Loop” while he gets himself caught up on all the niggly things he’s been putting off. The loop-hole is then dissolved without any Fancifulls being aware they’d been replaying one particular day of their life for multiple days. (Does this remind you of a certain movie?)

Neat trick if you can get away with it. Right? 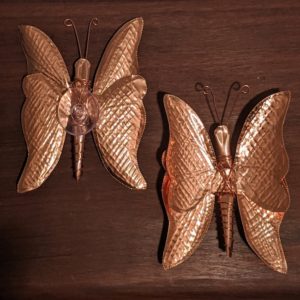 Let me introduce Cassidy, Carter and Clementine. They have been out weeding around the Lingythingy Berry Bush for what seems like an eternity. Kristoff, their guardian, shoos them outside after they finish their breakfast, exactly the same breakfast each morning, and tells them not to return until all the weeds have been removed. Each day they head out. Problem is, there are no weeds. The Lingythingy is thriving, not a weed in sight. They are puzzled. They don’t recall weeding it.

The triplets are new to the community but they have already heard about Buttercup. If anyone can answer their questions and figure out what is going on, Buttercup can.

Meanwhile, Butter is deep into spring cleaning, without interruption. He’s beginning to see improvement over the haphazardness of three days ago.  Was that a knock at his door? Yes, definitely a knock, albeit timid.

On the other side, three crickets stood staring up at him, a little dumbfounded. Hadn’t they ever seen a butterfly in a pinny before?

“Yes. Excuse the apron. I’m doing my spring tidy-up. How can I help you?” Buttercup was so wrapped up in his cleaning, he never stopped to wonder why ANYONE, let alone three young crickets, obviously identical triplets, were knocking at his door. What happened to his spell?

“We have a mystery, Sir,” Carter gets his voice back first.

“Sorry to bother you but we are so confused. I’m Carter and this is my brother, Clem (Clementine), and my sister, Cass (Cassidy). We are pleased to meet you and hope you can help us.

“Our  Guardian, Kristoff, Do you know him? Anyway, he sends us out to weed the Lingythingy Berry Bush every morning but there are no weeds to remove. It has been weeded. Why would all the weeds be gone when we don’t remember weeding it? Can you help figure out what is happening?”

Uhhh Ohhh, thought Butter, these foster crickets are new in the community. They arrived just as he was settling down to start his cleaning. They must have missed the Charm Sequencer (Buttercup’s answer to the Google Car) when it rolled past their new home. Butter had to think fast!

“I’m sure everything is fine. Why don’t you go out and have a look around your new community. Seems to me that Kristoff’s main concern was that you spend time outdoors and get lots of fresh air. Wander around. Explore Oh Valley. Don’t forget to be home in time for dinner. I promise that by morning, everything will be ‘right as rain.’

“By the way, how are the Lingythingy Berries ripening up?”

Cassidy, happy with Buttercup’s response, and prone to exploring, ignored his question. Instead, she posed her own.

“Can we come inside and explore the turret? It looks ever so interesting!”

As Cassidy tried to slip under Butter’s wing and gain entrance – without success, Carter said he was not sure. They’d never seen a Lingythingy Berry bush before. “How do you tell when the berries are ripe?”

“When the Berries are soft and have turned from a bright orange to a deep blue, they are ripe and ready to pick . Raw, they are very bitter. Cooked, their flavour mellows and they are the star ingredient in my home-made chutney, a favourite Snarlguk condiment.

“And you, Miss Cassidy. You can see by my pinny, I’m in the process of a good cleaning and everything is a bit at sixes and nines. Maybe another time?”

Buttercup turned his attention back to the boys just as Carter said the berries were actually a yukky brown colour. Clementine thought they were rotten. He was going to try one to be sure but Carter said he shouldn’t. Why would Kristoff want them to weed a bush that had rotten berries on it?

(Kristoff makes Lingythingy Wine with the berries and wants to pick them once they reach their height of ripeness to ensure plenty of sugar and starches. He found this rare bush on a recent walk in the marshland and it reminded him of home, Geugenstorch, where these bushes were cultivated into every back garden. In a month, they’d be ready to pick.)

“That’s good! Right on time, Buttercup said. Between bright orange to a ripe, deep blue, the berries go through a muddy colour stage. As I recall, it should be another week and they will be ready to pick. Would you like to help me pick them?  Then you can come inside and help me make chutney, and You,” Butter looked directly at Cassidy, “can go on an expedition of your own around the turret. How does that sound?”

Cassidy stared up at him with a wide-eyed innocent smile. “Do we have to wait?. We’re right here NOW.” What a little imp!

Carter and Clementine were fine with his invitation for next week and dragged Cassidy away before she could persuade Buttercup to let her in NOW. Cassidy was very good at persuasion. Today, they would explore the out-of-doors, certain that was what Buttercup had intended.

Author’s note – It’s a good thing Fancifulls are friendly and willing to share equally among the community. I hope Kristoff learned that in Geugenstorch. Either way, I think the triplets will be busy. 🙂

Buttercup leaned against his closed door. “Oh My Word! That was close!”

Buttercup pondered throughout the day what should be done. He felt guilty for not actually answering the children’s question. How could he? It may have frightened them to know his power… except for that young Cass. She didn’t seem to be afraid of anything!

By the end of the day, after lightning-speed cleaning, Buttercup realized he should not be taking advantage of his powers in such a way. He would never do it again! Butter resolved to never allow his turret room to get into such a disheveled state that it required multiple days to clean it. He would plan his life to include time for more than researching and answering questions.

He would never again stop everyone else’s progress so he could catch up… Never Ever Again!

Tomorrow, he would celebrate Groundhog Day in the same manner as his neighbours, by nudging poor Beckham, their community Groundhog, to see if he sees his shadow. He’ll watch with everyone to see if Beckham races back down into his burrow, to signify six more weeks of winter or if remaining above ground, spring would be right around the corner. Either way, Buttercup would be ready for it!

Tonight, Buttercup would also take some time to watch the setting sun from his turret window, high above the trees.

Here’s hoping your local Groundhog doesn’t see his shadow and spring is around the next corner.

Sue, Axie, Wiarton Willy (who did NOT see his shadow this morning), and all the Fancifulls of Oh Valley

UPDATE JUNE 23, 2020 – I do try to base my imaginary tales in some science. In doing so, I am learning many interesting facts about insects. Today I have learned that a butterfly never emerges from a cocoon.  Butterfly caterpillars shed their skin as they grow, similar to a snake. However as they prepare to transform, their final outer skin hardens into a pupa otherwise known as a ‘chrysalis.’ Knowing this is happening, the Butterfly caterpillar will use its own silk threads, similar to a silkworm and attach itself to the underside of a branch and await the hardening his body and the magical transformation. How AMAZING is that?

How do they know when to suspend themselves from the branch? Couldn’t it be dangerous with birds lurking if they don’t harden quickly enough? Now I have more questions!

Technically this story about Buttercup – that I have edited to the best of my ability, should state that he emerged from his chrysalis with his massive book collection. I’m leaving that part as is to see how many readers notice my error.

Some moths, though not all, are creators of cocoons, before the chrysalis process begins. The cocoon gives them an extra layer of protection around their hardened bodies. (Here is a time lapse video of the Woolly Bear Caterpillar creating his cocoon.) The silk worm is a well known example, with their actual cocoons unraveled in a washing process and woven into the fine silk garments worn around the world.

If you are a firm believer in doing no harm to living beings on our planet, I suggest you research Ahimsa silk, manufactured in a process that does not harm the silk worm and allows it to complete its metamorphic process and fly away prior to harvesting and washing the discarded cocoon.