Calvin (Caterpillar) has just learned that he has an uncle living in Oh Valley at the famous Insect Inn. He thinks he might like to meet him. Everyone tells him that he’s the spitting image of Uncle “Butter” at his age. “Spitting image?” How could that be good?

Calvin’s curiosity gets the better of him so making sure it’s OK first, he leaves his home in Beetlecrum, heading for Oh Valley. It’s a fair distance but he’s pretty sure he can make it there and back before dark. Calvin’s been on many adventures and believes the journey is half of the fun.

He sets out before first light. Not even the birds are awake and chirping yet. This is good news for Calvin. He knows that, with his girth, he’s apt to be a lovely breakfast for an ‘Early Bird’ who mistakes him for a worm. This early, before the sun is up, Calvin could easily be mistaken for a worm because he is long and low to the ground. He has no hair or feathers or fur.

Calvin, however, has something that true worms don’t have. Calvin has legs. He has six true legs and some others called ‘prolegs’ to help hold his belly off the ground. You don’t see legs on worms, do you? Don’t get me started on the Inchworm. It is not really a worm, just like a ladybug is not a bug. Ladybugs are beetles. An inchworm is a caterpillar. Calvin should know. His best friend is an Inchworm. Calvin even asked him along on his adventure but Cinch, the Inchworm, was busy helping his mom measure for new curtains.

Calvin wonders what it would be like to know from very early on, what your purpose is. Cinch told Calvin he always knew he would be a tailor’s apprentice. He studied hard in school learning both the Imperial system and Metric system of measures. The Imperial was easy. If Cinch got stuck on a calculation, he said he went for a walk and measured his way back to the answer. The metric system of measuring was trickier at first. His body was an inch long, not a centimetre long. It wouldn’t help him with math equations that involved metric measurements. It didn’t take long, though, for him to figure out that metric math is actually much easier to remember because all measurements are based on the number ’10’. 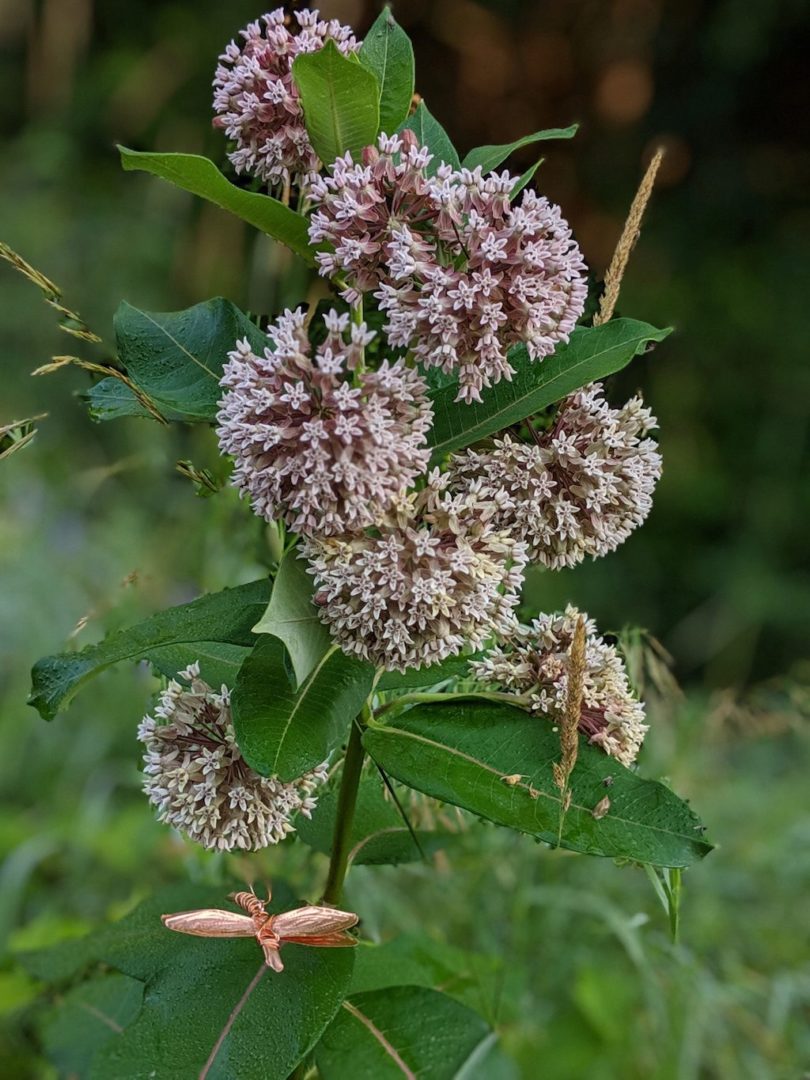 Delta hanging out with Calvin on a Milkweed Plant. Calvin is around back making his bed before breakfast.

Calvin wasn’t sure what he wanted to be. He kind of liked the idea of becoming a certified Milkweed Milk taster. He could help other caterpillars choose the best milk to drink. Some milks taste better than others. He should know, he drinks it all the time… and eats the leaves of the Milkweed plant too. That is all he eats. He drinks water too if he gets thirsty. He can usually find as much water as he needs in the curled up leaves of the plant he’s munching on.

He’ll have to think on his future some more but for now, he had better quit dawdling and make his way to Oh Valley.

Once he stopped day-dreaming, he found he was already on the outskirts of Oh Valley, much sooner than he imagined he would be. He asked a few locals if they knew his Uncle Buttercup. They knew of a resident at the Insect Inn named, ‘Butter,’ but they weren’t certain if this could be Calvin’s uncle. There were no recognizable similarities.

With help, Calvin arrived at the inn and was directed to a room at its very top! Uncle Buttercup, it seemed, lived in a turret like the ones you see on old castle buildings. It was a long climb for Calvin, part of it on a spiral staircase that seemed to go up forever. But that would not deter him. He was not going to miss meeting his uncle now that he was almost there.

Butter answered the door with quite the start. He had almost forgotten about his formative years when he was still a caterpillar. Only the books that lined his round room all the way to the turret peak reminded him of his homey cocoon, a long time ago. Being inquisitive as well as well-mannered, Butter invited Calvin in for a visit. What could this out-of-breath caterpillar want with him? 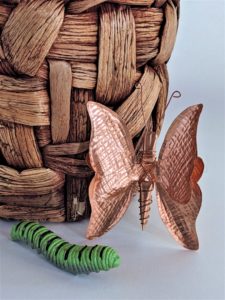 Hello Uncle Buttercup. You were expecting me?

Calvin is amazed at all the books he sees. Yet, he doesn’t see any way to reach the ones high up. There are no staircases, or elevators, or ladders. He asks Buttercup how he gets to the ones on the top shelves. Buttercup spreads his wings and flies up to the peak and brings down one of his favourite books – ‘How to make Small Spaces Seem Sizable.’ He’s used the information between the covers of this book many times while building shelving in this very room.

Calvin is gob-smacked! “If you’re my uncle, will I be able to do that someday too?”

“Build shelves? Of course. Anyone can do it. I’ll even loan….”

“No Sir. I mean… Will I be able to get off the ground and go into the air without hanging onto anything at all? Will I?”

“Yes, Calvin, I believe I am your Uncle… so yes, you will be able to fly someday too. When that happens, please come back to visit so I can see how you’re getting on. I guarantee that your won’t take nearly as long to get here as you did today,” Buttercup smiles at his nephew.

With that, Calvin and Buttercup sat down for a look at the book Buttercup had brought down from the shelves. Calvin learned all about cross-cutting, toe-nailing and shimming. He learned to “Measure twice or even 3 times BEFORE cutting once,” to be sure you cut the correct length of wood you need. He wanted to try out all the things he read about as soon as he got home. He knew the exact caterpillar he needed to help him with the project, Cinch!

Calvin thinks he might like to be a carpenter now but may have to get approval from the UCAT, Union of  Carpenter Ants and Termites before he can make a final decision. He looks forward to visiting Uncle Butter again to learn something new over a nice drink of Milkweed milk.

Hope you have a wonderful day with whatever project you’ve chosen to challenge you.

Sue, Axie, and The Fancifulls of Oh Valley