Daisy has come to visit her friends at the Magical Insect Inn of Oh Valley. It has been a very long time since she last visited. She’s hoping her friends will still recognize her. Even she thinks she looks so much different from her last visit, when she spent all her time out back of the Inn, in the cattail shallows of the Mighty Oh River. Much of her time was spent keeping her 360-degree gaze on the local Bull Frog, Fester. Daisy didn’t want to become his next lunch. 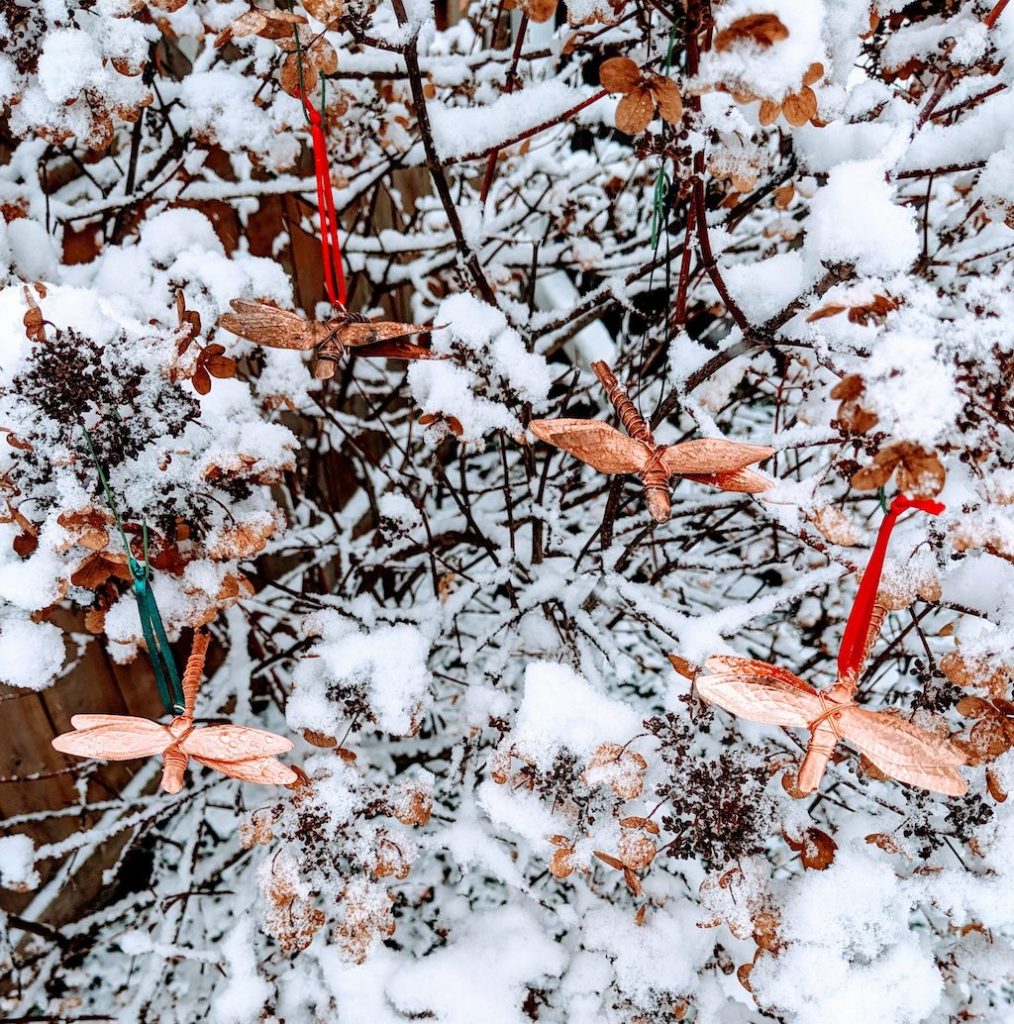 Darby, however, had been called away on duty and was not expected to arrive until very late on the afternoon of the Ball. He would not be there to greet her on her arrival but would do everything in his power to ensure he was there to greet and escort his guest into the fabulous ballroom, centrally located inside the three-turreted, Insect Inn.

Daisy is so looking forward to seeing Darby and all her friends again. The trip to the inn took a fair bit longer than you would expect for a dragonfly. Daisy was accompanied by her young friend, Twig. As Twig, a Walking Stick, is unable to fly, Daisy walked the distance to Oh Valley with him.

Twig was on an errand to Silvio’s Haberdashery to pick up the silk hat his mother, Willow, had on order. Daisy convinced him he should come to the Cotillion and that he would have loads of fun. He would meet some new people, many of them with interesting tales to tell. With Willow’s permission to stay overnight at The Insect Inn, and return with her hat the following day, it was all set.

Twig missed part of his Mom’s conversation with Daisy. Instead, he was doing what Twig liked to do best – day dreaming. While they were talking, he was imagining life as a living “Pick-Up-Stick,’ where he, and only he, would determine the outcome of the game. What Power!

Daisy assured Willow that she would look out for Twig and be sure he was respectful of his elders. Willow knew that her son would be learning a very good skill at the cotillion. Like all skills, learning young was definitely the way to make the new skill stick with you.

Do you know what a cotillion is? Twig didn’t… yet.

The walk was sunny and bright and the pair talked all along the path to Oh Valley. Twig was having some difficulty with his “times tables” , especially 7 and 8’s. He thinks it was because he missed school the day they were taught and never quite got the hang of either of them. They recited them together and Daisy helped him catch up to the others in his class. By the time they arrived at their destination, Twig knew all the times tables through 12 and was very relieved to now be ahead of his classmates. What Twig still didn’t know, and hadn’t thought to ask is, “What’s a Cotillion?”

Daisy and Twig checked into their rooms at the Magical Insect Inn. Once he was unpacked, Twig came out of his room to have a look around. He saw all the fine decorations and then a poster advertising the ‘Winter Cotillion.’  All the insects pictured on the poster were dancing. He wondered why?

“Oh  fine. It’s bigger than my room at home and there’s extra leaves in the corner that are folded neater than I’ve ever seen before.  Hey Daisy? Why does this poster show insects dancing?”

“Twig, what do you mean?” Dixie looked confused. “Don’t you know what a cotillion is?”

Twig shakes his head back and forth. “No.”

“It’s a french name for a Ball where we dress up and dance the night away! It will be so romantic!” Daisy was obviously thinking about dancing with Darby.

” What? Oh no. Not me! I’m not dancing. I don’t even know how to dance.  Listen Daisy, I’m gonna clear outta my room and go now. I gotta get Mom’s hat before Silvio closes. See ya back in Crazywort.”

“Stop right there, Mister! Don’t run off like a scared rabbit. Your Mom raised you better than that. I promised her that I would teach you how to dance. Learning to dance now will be an advantage when you are older. You won’t be embarrassed when you want to dance with someone. You’ll know how already. The one you choose to dance with will be very impressed Please trust me. Twig?”

Obviously this will be Twig’s first Winter Cotillion and both he and Daisy had their work cut out for them. Twig doesn’t want to disappoint him Mom or his friend.

Now of course, Twig found walking easy, for Twig is a Walking Stick. Dancing, however proved to be a bit problematic. Though he was giving it his best shot, he couldn’t get his six legs to move in unison and unlike Daisy, who seemed to be comfortable on four and sometimes two, he needed all six legs to keep his balance.

Fortunately as his frustration at not being able to control his own limbs started to get a solid grip on his temper, Darby arrived. He saw Dixie and came rushing over, apologizing for not being here when she arrived. They began to talk so fast to each other as though they were making up for lost time. They totally forgot he was standing there with his legs in knots. This was his chance to skedaddle if only he could untangle himself. If he hurried, he could still make it to Silvio’s Haberdashery before closing.

“Not so fast, my friend.” Darby spoke clearly and sharply, something he’d picked up at Drone School.

I really do need to get my Mother’s hat before Silvio’s closes for the day.

“May I join you?” Darby asked. “I need a new Top Hot for tonight and if any shop has what I hope to find, it will be Silvio’s Haberdashery.”

Twig was out of there so fast that Darby found it difficult to keep up. “What’s your hurry, Twig?”

“Daisy is trying to teach me to dance. I’m not very good. I’m not good at all. I don’t understand how she can stand on four legs and sometimes only two. It’s impossible!”

“Ahhh, I see. I think there is something that Daisy forgot to mention when she was teaching you. The easiest way to learn to dance is to look for the best dancer in the room and ask them to dance. You lean on each other. They will hold you up so you can balance on four legs. Soon, you’ll be balancing on two legs because you’ll be using their legs to help you balance. After a song or two, you’ll get the hang of it and won’t need to lean on your partner as much. By the end of the evening, you’ll forget that you arrived today not knowing how to dance. You have my word.” 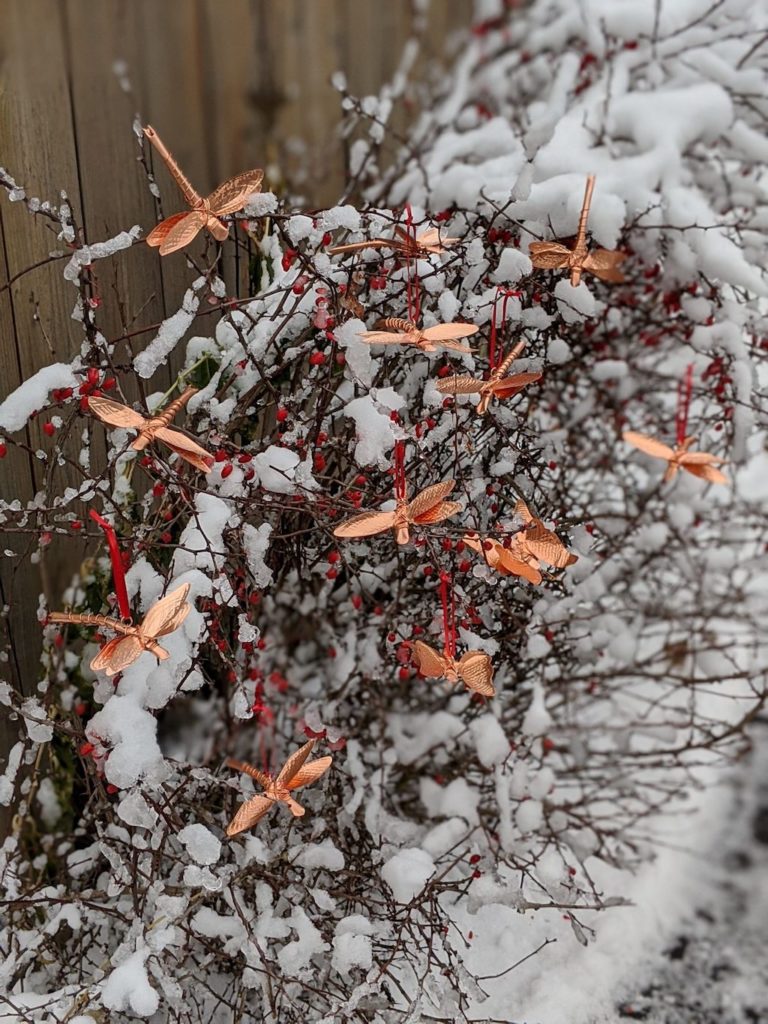 Twig stared at Darby in amazement. Darby was an insect of the world. He must know what he was talking about, right?

“I know it sounds impossible right now but you give it a try tonight and I guarantee you’ll enjoy yourself and by the end of the night, you will be glad you learned how to dance.” Give it a go?” asked Darby.

Darby bought a beautiful top hat lined with the smoothest royal blue silk while Twig waited with his Mom’s parcel.

That evening as the music started to play in the ballroom and all insects were assembled, Darby turned to Twig. “One last piece of advise?” 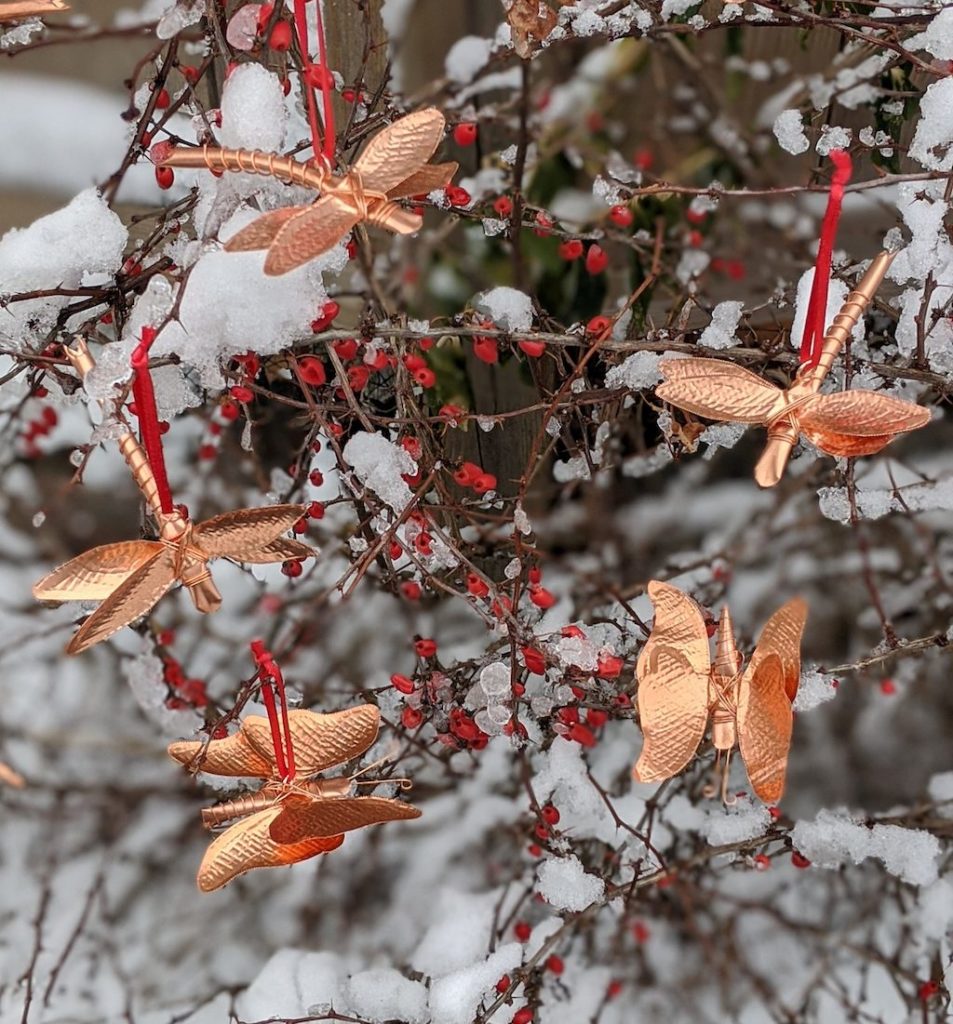 “Don’t expect to be perfect.  If your legs do get tangled up, laugh it off. Remember, tonight is meant to be fun.”

With that, Darby lifted his splendid Top Hat and set it on Twig’s head. Darby had only bought the hat to bolster Twig’s confidence. It was not too long ago when he was in Twig’s shoes.

“Now you’re the most dashing Gent in the room.” Enjoy yourself! Now where’s Daisy? And off Darby went to find his date.

“Thank-you Darby.” But Darby was already gone. Twig felt 10 feet tall as he crossed the room to ask Flutter to dance.

Have a wonderful week ahead everyone.

Sue, Axie, and the Fancifulls of Oh Valley

PS…. All Dragonfly Fancifull names begin with a “D” 🙂

Silvio of Silvio’s Haberdashery is a “Silkworm Moth” and all the silk for his hats is produced on premises. I promise to introduce him at a later date.