Darby is learning it is very hard to keep a secret… a secret about himself. He is afraid his friends will not like him anymore.  They will make fun of him when he tells them why he’s always doing homework after dinner. He will lose their friendship if he explains why he will not come out and play. He always replies that he is in his last year at Drone-On Dragonfly Academy and needs to do his best so he can go to university and study business finance.

Maybe Hazy Dayz Dragonflies will hire him when he graduates. 🙂

Darby is not being entirely truthful with his friends. It is true that he wants to go to university.  He studies very hard to get good grades in school. Not only does Darby want to get into a good university, but he also strives to retain what he’s learning here to help him  once he gets there. Darby is a very smart dragonfly, one afflicted with a very common phobia. He studies at night so he won’t be outside past dark. Darby is afraid to be outside when darkness falls. 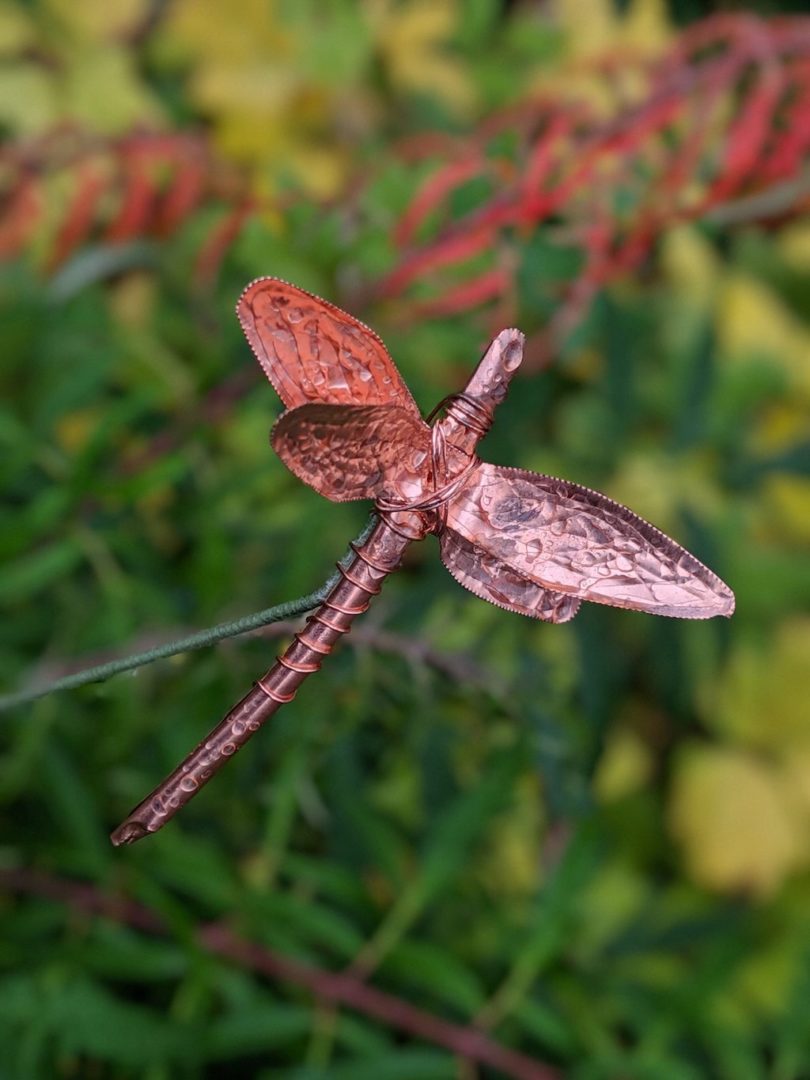 Darby on his way the Drone-On Dragonfly Academy

Nobody knows this. Darby has been able to keep it secret from his cousin, Delta, and his kinda’ girlfriend, Dixie.  His Mom, Dad, and little sister, Darla, do not know. Everyone thinks Darby is strong and brave. He knows he isn’t. Brave dragonflies are not afraid of anything, certainly not the dark.

Darby does not know why he is afraid. He is not afraid of dark spaces indoors and doesn’t need a night light anymore in his room. When night falls, it’s the big open spaces outside that terrify him.  Darby isn’t little anymore and doesn’t know what to do about his phobia. It would be so embarrassing if his friends were to find out.

Darby remembers his friend, Dash (Please read “Darby’s Home”). Dash has become a qualified Military Drone, graduating top of his class. Dash said he was signing up in the summer, and he did. Second Lieutenant Dash Dragonfly is brave. Darby wishes he were brave too.

Dash is a bit older than Darby and they lost touch while Dash was completing his university degree and military training…. To be a military drone, you must be an officer. To be an officer requires that you complete a degree of study at university. It doesn’t necessarily have to be a degree in avionics or aeronautics, though either of those majors would be useful. A university degree in any field will suffice to prove that your mind is capable of learning the tough stuff, required to be a military drone.

Darby wants to be a part of keeping his country safe. He loves to fly in daylight, always attempting to fly higher and faster. He remembers how fast Dash was at Drone-On. He still holds school speed records for target diving. Darby is trying to break those records. A few Fancifulls even call him a dare-devil and are concerned for his safety. He knows he’s pushing his limits, overcompensating, to draw attention from his weakness. He decides he needs to seek some advise from Dash.

As luck would have it, Dash was on leave in Oh Valley. He was grounded until the focusing chip of his on-board digital camera could be replaced. He dropped off the camera and came home to have a short visit with everyone. Darby said he wanted to talk privately with Dash about something very important – No kidding.

Leaving Oh Valley in the Distance.

They slipped away and headed to the Mighty Oh River where they hovered for a heart to heart – a real important conversation.

Darby didn’t know where to begin. He’d been hiding his phobia for so long. He might as well get it over with and thought of  pulling a bandage off quickly. He told Dash that he wants to be a military drone just like Dash but also told him why he didn’t think he could be. He said that he, Darby MacIntyre Dragonfly, is afraid of the dark. Darby couldn’t see how he could perform his duties satisfactorily if he is only flying when the sun is up. Weren’t a large part of their duties done in ‘stealth’ mode which works triply better at night?

Instead of making fun of Darby, Dash hovered there for a minute or two. It seemed like a very long time to Darby. Maybe it wasn’t that long but it sure seemed like it was. Could Dash help him? Then Dash spoke, “Have you ever flown at night, Darby?”

“Never. I go inside as soon as the sun has set before it gets really dark out,” came Darby’s very quiet reply. He was so embarrassed.

Dash looked Darby in the eyes, “I promise to keep you AND your secret safe. OK? I want you to see something, something that I think will help you. Do you trust me?”

“Yes. I told you my secret, right? I couldn’t have done that if I didn’t trust you”

“Sure enough. I’d like to help you with your fear of the dark. I would like us to fly to the edges of Oh Valley just as the sun is setting.” 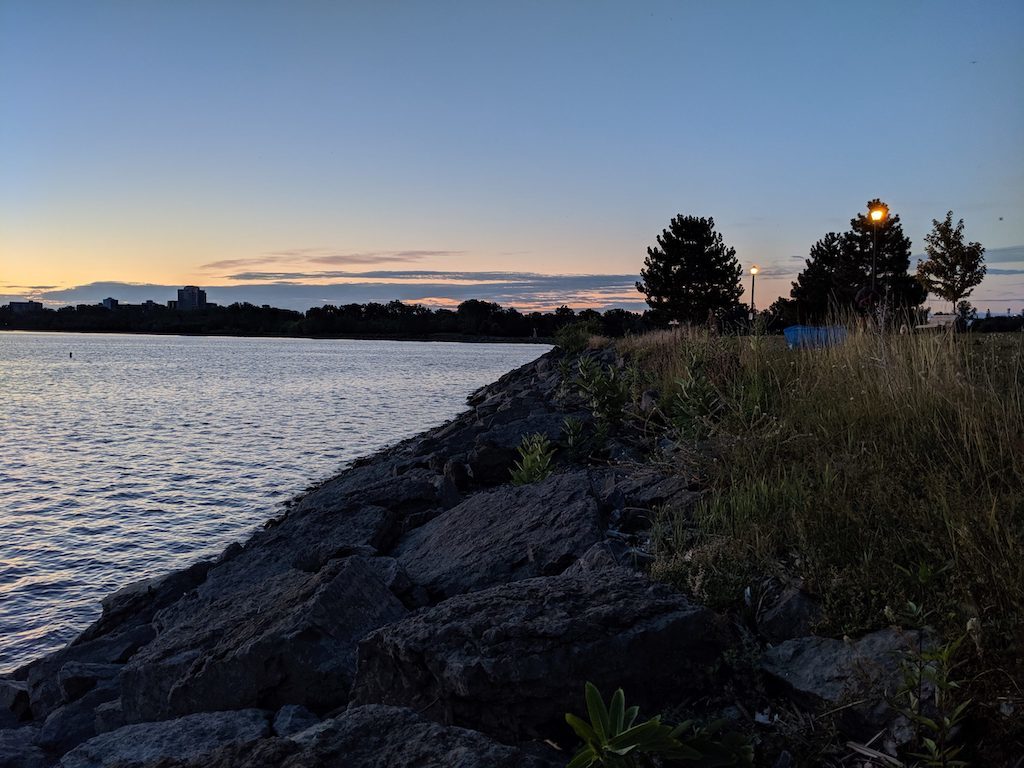 There goes the sun.

Darby was very nervous as they flew to the edge of Oh Valley. When they got there, the sun had set and at first he thought the sky was dark. Then he noticed the blinking lights of Crazywort in the distance. That was really cool! He could see some lights further in the distance too. Dash said those were the lights of Waterville, where Darby’s friend, Bradley lives. Darby could see bits of light above him too. Those, Dash explained were stars. In his military training, Dash learned how to navigate using star locations, time of year and time of day.

“Stars can guide you, particularly Polaris,The North Star, that big, bright one up above Waterville.”

Dash told Darby that there had been a few times when he’s had to rely on this training because his on-board electronic guidance system was doing its own little dance and not helping him fly. When he brought it in for repairs, the Drone Technician told him they had to get the ‘bugs’ out. Even Dash was confused about that. He hadn’t invited any bugs to see his guidance system. How did they get in?

Dash said that tonight the sky was actually quite dark tonight because there was a ‘New’ moon which meant that the moon was not shining on Oh Valley like it does most nights.

Darby had no idea there was actually this much light at night. Dragonflies have extremely good vision and Darby realized he was seeing almost as clearly at night as he could during the day. He was so happy and so relieved! He was not afraid anymore.

He was excited to see more and asked Dash to fly over to Crazywort with him and check out the Dettledag plant in the Community Garden right now! He’d only heard about the Dettledag plant when everyone returned home after the Fancifull Celebration. He didn’t see it because he wanted to get home well before dark – “and study.” He and Dash flew to Crazywort to see the white flowers that were still popping from the Crazywort… er…. Deetledag plant although the leaves had changed back to green from their celebratory blue. 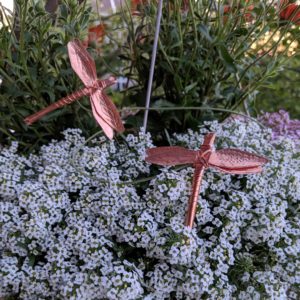 Darby and Dash darting around the Deetledag bush in Crazywort.

Dash and Darby flew around well into the wee hours of the night. It wasn’t nearly as dark as his imagination made him think it would be. Darby also wondered if the fear of other Fancifulls finding out  made it all seem worse… a big mountain of fear too high to fly over. What do you think? Could Darby’s fear have grown because of the imagined expectations he thought everyone had of him?

Darby’s one pretty smart dragonfly, isn’t he? I think he’ll make a fine military drone one day. For now, he needs to get some sleep. He doesn’t want to miss school in the morning. He has so much to learn about LIGHT, especially Light Emitting Diodes (LED’s) – and maybe lasers! The possibilities are endless!!!  Darby could envision new horizons for his life because he trusted in Dash and Dash was able to help him by flying with him over the horizon of Oh Valley.

You may need some gray hair to understand the significance of the following. 😉

As Dash and Darby parted for their own homes, Dash called to Darby, “You, Darby, can be my ‘wing man’ anytime.”

At which cheeky Darby responded, ‘YOU can be MY wing man anytime!”

Don’t let anything stop you from reaching your full potential.

Sue, Axie, and All The Fancifulls of Oh Valley

(Thank you to Darby and Lilly, my new (human) neighbours, for inspiring me.)